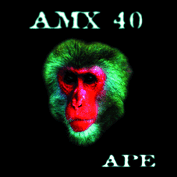 AMX 40 is Alain Werffeli. Additional guitars by Guido Frej. Music mixed and recorded by Alain Werffeli except ‚NIGHT‘ recorded and mixed by CARLOS PERON based on an early tape by AMX 40 with full analogue treatment.

AMX 40 – The name stands for a man and his acoustic vision of mankind’s story. ‚APE‘ is the title of his concept-album, a musical meditation on human evolution. Recombining the genes of old 70’s electronic-avantgarde, ancient – industrial and modern trance – sounds in a brilliant way AMX 40 creates a soundtrack of our past in his studio testtube. Starting this epic with ‚Chaos‘, a track dealing with the problems of our primate predecessors, followed by ‚Meat‘ and especially ‚Night‘ (with 28 minutes of a nearly endless suite on the threats of darkness), ‚Walk‘, the upright step into mankind’s dawn, ending with ‚Fire‘ and ‚Population‘, ‚Ape‘ produces an almost 3-dimensional experience. Its brilliant structures and samples makes the record a forward-looking piece of brain cinema at its very best, a monumental epic of a screen that everybody can roll out for their personal home movie.