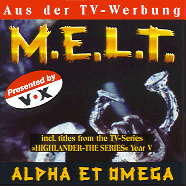 M.E.L.T. – A European band expressing their respect and adoration for the earth in their music and work, influenced by the members‘ different cultures, taste, origin and experiences, their passion for nature, mysteries, the celtic culture. The music may be described as Gothic Grunge as well as the result of anything ever happening in popular rock culture. M.E.L.T. singer Markus Testory plays Caspian, the 4th horseman of the Apocalypse, in the international TV-series Highlander – the Series Year V. The M.E.L.T. titles Alpha et omega, Steps and Follow my voice are included in the TV-Soundtrack. Testory is former member of the gothic band A Wedding Anniversary, well known for the radio hit, ‚The Man from the hills‘.