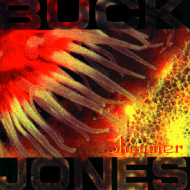 -Strong and consistent touring throughout the USA.

Top-drawing new rock quartet BUCK JONES from Texas takes a huge leap into the big-time with their Sophomore release ‚SHIMMER‘ on their new label MCG Whampire Records. Shimmer follows up the band’s debut album (Shoegazer – 1996) with 14 phenomenal new recordings that put them in the running for major national success. Producer David Castell (Deep Blue Something, The Nixons, Course Of Empire, etc.) fattened up the band’s musical attack and combined it with the unique male/female vocal blend of husband-and-wife front persons Burette and Gabrielle Douglas, creating a distinctively dense yet melodic rock sound for the next millennium.

Key tracks most surely include the seductive ‚NAMELESS‘, as well as flat-out rockers such as ‚T.J’s Rocket‘ and ‚Underground Crown‘. Also suitable for radio play are the tracks ‚Aged‘ and ‚Silverlush‘, making the album a contender for multiple singles and a long shelf-life. ‚NAMELESS‘ is also available as a shortened Radio Edit at the end of the album in the form of a ‚hidden track‘ for added programming flexibility. Shimmer should break BUCK JONES wide open at new rock radio in the southwest. Their strong, sexy live shows should’t hurt them either, so expect to hear a lot from BUCK JONES in the near future.