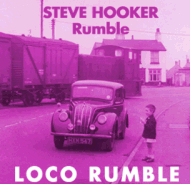 Steve Hooker is on the way to becoming a living legend. Rare and obscure material.

Drawn from experience with previous bands (The Shakers, Boz and the Bozmen), recordings (Wilko Johnson, Captain Drugbuster) and the example of an early hero (Chuck Berry), Rumble is a stripped down unit build to tour. No semi-trucks, lighting rigs or the like, when they hit town with the bass strapped to the roof and the drums in the trunk you know thats Rumble! They have hit the high and low spots of France, Holland, Belgium, Germany, Switzerland, Finland, Spain, New York and the U.K., been features on the soundtrack of a rockabilly vampire film and released one previous LP on 10″ vinyl. In addition to the London boys in the band, are included tracks on the Madison and Rock’n’Roll Trios (Germany) and the Catfish Blues Band (Japan without whom this project would have been impossible.