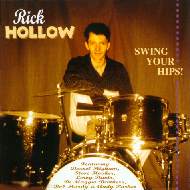 With guests like Darrel Higham, the Di Maggio Bros, Steve Hooker, etc., this really does swing, and track 11 is the Simon and Garfunkel song! Rick Hollow works in the tradition of 40’s and 50’s Big Band and Swing drummers with tireless professsionalism and has been recognized for his ability to compose and produce high quality songs with a certain feeling for forgotten recording details from the past. This cat has successfully experienced every possible part of the music business as drummer for several rockin‘ bands, tour booker, DJ, A&R manager, label owner and is well known as one of the most passionate workers in the Rock’n’roll field. Listening to this man playing his Ludwig Sparkle Kit the audience feels that Rick knows how to beat and brush the skins with his unmistakeable cool-as-heck style. ‚Millenium bop‘ should be a monster bopper in the clubs if there’s any justice…

Rick Hollow has successfully experienced every possible aspect of the media business – well known as one of the most passionate workers in the Rock-, Jazz- and Art- scene.
He started his career as musician, tour booker and DJ for numerous clubs, then joined a Radio station, became A&R Manager at famous record company Bellaphon, and his own company MCG.

Hollow is well-known in the industry for his tireless professionalism and almost endless knowledge of Blues, Jazz, Be-Bop, Avantgarde and Rock’n’Roll history and his ability to produce high quality music with a stylish feel for recording technologies from the past.

He became internationally famous for his work as producer, composer and arranger of soundtrack titles for award winning movies, his work for the Grand Prix Eurovision de la Chanson as well as for avantgarde theatre productions.
He has helped to start many aspiring modern art talents and continues to perform as live- and recording drummer for several bands in the tradition of 40’s and 50’s Jazz.