Darrel Higham And The Enforcers – Unleashed 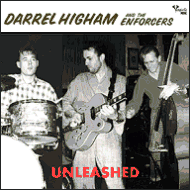 Darrel Higham is definitely one of top acts on the Rock’n’Roll scene and here he is with brand new enthusiastic Rockabilly recordings especially for the fans of classic Rock’n’Roll. What you get with this CD is the real Enforcers: powerful, hard edged modern Rockabilly. Songs such as Rockabilly Boogie and Jelly Bean have been part of their stage act for quite a while and this album is basically made up from a typical Enforcers set list and this will please the many fans around the world that have wanted just such an album to add to their ever growing collection of the band’s recordings.

The Enforcers started life in the mid-90’s. The idea was to be a contemporary, powerful modern Rockabilly band, not to dwell too much on the past but to try and move the music forward and bring it to a wider audience. Darrel and Mick formed the band and were joined initially by Russell Bradley on Drums. Russell played on the bands first LP ‚Lets rock tonight‘. Darrel had been working with Bob & the Bearcats and before too long he brought in Bearcats‘ drummer Les Curtis after the Enforcers had taken a short break during the summer of ’95. Darrel, Les and Mick started work on their next album ‚Mobile corrosion‘ later that same year.
In early ’96 the lads recorded their third LP. ‚Rockin‘ at the coconut top‘ that became a top record for DJs in Finland and so Darrel buggered off and recorded a solo CD entitled ‚High class baby‘ (with the great Barnshakers).
Meanwhile Mick built his own recording studio – Sweet Georgia Brown’s – with Ryan Savage and Les had a baby boy (or rather Les‘ wife, Jaquie, did the hard work and gave birth) and continued to become a legendary drummer. Mick also joined Les as a father when baby Ruby was born last year – congratulations, Mick and Julie!
Darrel made two more solo CD’s – ‚Howlin at my baby‘ and the highly acclaimed tribute to his musical hero, Eddie Cochran (The Cochran connection), got engaged to the beautiful irish songstress Imelda Clabby, before the lure of recording another Enforcers album became too much for all concerned to bear. What you have here is the real Enforcers. This is what the band is all about: powerful, hard edged modern Rockabilly.
This is what happens when three great rockin‘ musicians are allowed to set up and play live in the studio. A great deal of thanks must go to the great Boz Boorer for getting the best out of the lads and for giving them the time and encouragement to produce this, their finest album. Songs such as ‚Rockabilly Boogie‘, ‚Jelly Bean‘ and many others have been part of their stage act for quite a while and this album is basically made up of a typical Enforcers set list and this will please the many fans around the world that have wanted just such an album to add to their ever growing collection of the band’s recordings – the 100% dedicated, powerful Rockabilly Music they have come to love from the lads.
If Gene Vincent was around, he would approve. This is the future.