Bob And The Bearcats –
Rollin‘ to the jukebox rock 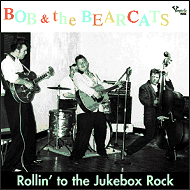 The Bearcats were formed in the early 90’s and quickly established themselves as one of the finest U.K. Rockabilly acts during that period. The band played continously throughout the U.K. and Europe and saw three albums released on the Pollytone label: ‚Hold on tight‘, ‚On the rampage‘ and ‚High heels and homicide‘.
They also expertly backed a number of British and American artists: Vernon Taylor, Colin Winski, Wee Willie Harris, Screaming Lord Sutch and Graham Fenton to name but a few and gained rave reviews from a number of respected Rock’n’Roll magazines such as Now dig this, Southern and rockin‘, Clubs and Deathrow Database.
The material on this CD was recorded during a three year period and contains songs that were intended for release on a number of four-track vinyl EPs the band was planning to have out to sell at their gigs. Now that the band members have all gone their separate ways it is fitting that this collection of inventive, highly entertaining and powerful Rock’n’Roll/Rockabilly is gathered together as a tribute to one of the UK’s best modern-day exponents of the music.
However, the Bob & the Bearcats story is far from over. A re-union bash has been talked about, the odd one-off gig seems likely and maybe one day the guys will go back to the studio and create another Red hot rockin‘ masterpiece. F. Abbott, Dec.’99