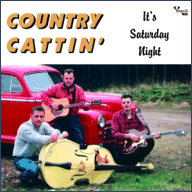 1.It’s Saturday night
2.I’m left you’re right she’s gone
3.Such a pretty thing
4.Suspicion
5.You win again
6.Standing in your window
7.You won’t slip thru my fingers this time
8.Don’t call me at home
9.I smell a rat
10.Maybelline
11.Mystery train
12.I’m ready if you’re willing
13.I’m letting you go
14.Long black veil
15.Wild side of life
16.Let your hair down baby

All three members do have busy gigging schedules with top bands but did feel they were leaving their roots a little bit. They have always had a passion for early Hillbilly/Rockabilly done Country style and got together for some jam sessions just to let off steam and have a beer but soon wanted to record some of their favourite classics for their own pleasure. A studio was booked and 18 songs were recorded, 16 songs are on this album – recorded live with no overdubbing and most on first take. The recordings were only meant for personal enjoyment but the band was very happy with the output and music critics said that it should be released.
This is the first Country cattin‘ album and it was great fun doing it. The album contains favourites that got us into rockin‘ in the first place as well as some original material. We hope you will enjoy these recordings as much as we did recording it.
Thanks goes to Patrick, Stefan, Stacey, Cheryl, Big Pete, Jayne, Graham at the Stables recording studio, Sean Griffin from ‚Fastlane Autos‘ 0374 725722 North Somercoates for the Ford 47 and photos, The Bomber County Cruisers car club, Gary for the Studio photos and the cats that have supported us on our gigs. Hope to see you soon.
David, Paul & Nathan