Mark Kelf & The Valley Boys – Have myself a ball 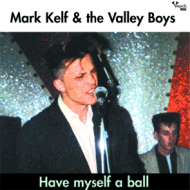 The Valley Boys have evolved over the past two decades. Singer/double bass player Mark Kelf was originally the front man for the popular early eighties neo-rockabilly outfit ‚Fireball XL5‘. After a single, an EP and a LP, the members took different musical directions.
Mark has a vast library of songs and put together a Hillbilly/Rockabilly trio named Pandora’s Cowboys (1987). Martyn Poppey played lead guitar (formally with Dynamite and currently bass with The Extroardinaires) and Ian Cooper played rhythm (former Fireball XL5 drummer). After a few local gigs Ian left and I was asked to play rhythm. Later Martyn left to pursue a musical career via music college so I reluctantly took over on lead guitar. We jammed with local rockin people but ‚Dick‘ Simon Wellesley-Davis (double bass) and Nick Alexandra (drums) became band members. We recorded several songs together but family and work commitments prevented us from gigging regularly. Unfortunately Dick passed away and we finished the band. But our enthusiasm got the better of us. Nothing much was being recorded on the rockin‘ scene and I knew Mark could do better than cover versions so we resumed recording. Thorny (former XL5 guitarist ) has recorded a few tracks with us, including ‚It don’t take much‘.
When Mark’s quill dries up, I pen the occasional song. Our influences cover the whole spectrum of rockin music i.e. Country-Blues-R&B-Rockabilly. Due to popular response at record hops we have decided to let you folks out there have a listen.
So turn up loud and enjoy! These recordings are dedicated to the memory of Dick (Simon Wellesley Davis).
Richard Howard

More Bestsellers from the Kelf catalogue: