1.All aboard, Cats! (instrumental) 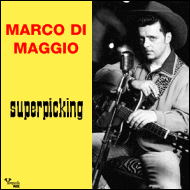 2.Rockin’n’Rollin with granmaw
3.Oklahoma hills
4.Frantic love
5.Everywhere you go
6.My rockin‘ soul
7.Hey, Good lookin‘
8.Double talkin‘ baby
9.How do you think I feel?
10.Highway Patrol
11.Superpickin‘ Polka (instrumental)
12.My Heart tells me
13.If you want it enough
14.Everywhere you go (acappella)

MARCO DI MAGGIO
is an excellent guitar player with several stage appearances who began at the age of 13 in different local bands. His brilliant musical background covers many styles ranging from Rockabilly, Western Swing, Country Fingerstyle to Rock’n’Roll.
In 1990 he started playing professionally in all the major clubs and open spaces all over Italy and abroad with his band ‚Eddie & the Houserockers‘. He played with: Gene Vincent’s Blue Caps, Kevin Smith (High-Noon), Narvel Felts, Linda Gail Lewis, Alvis Wayne, Terry Williams, Mike Salmineen (Barnshakers), Dave Roe, Paul Burlison, Rocky and Billy Burnette, Martin Ace.
In 1995, during the British tour, he formed a band called ‚The Italian Lovegods‘ with Terry Williams and Martin Ace rocking London, Pontypridd, Croydon, Bristol, Swansea and appearing a couple of times on Welsh Television.
He has also appeared in some national italian TV shows. In the same year his first CD came out – Eddie and the Houserockers, titled ‚Tele Rock And Roll‘. In 1996 he toured all over Italy with The Italian Lovegods. In 1997 he started giving guitar lessons in different stages and school seminars for Lizard, one of the most important italian guitar acadamies. With his band, Di Maggio Bros., he released the second CD ‚Rockabilly from the
boots up‘.
On Vampirella Music he released his first solo album titled ‚Thank you Eddie‘
– The Tribute to Eddie Cochran, as well as his brand new album. You can also find his guest appearances on the following albums: Rick Hollow – ‚Swing your hips‘ and ‚All dressed up‘, ‚Buddy Holly Tribute‘ with ‚It doesn’t matter
any more‘, ‚Wild Men Bop‘ with ‚King Creole‘ and on the compilation ‚Kings of Rockabilly Guitar‘ with the world’s best guitar players.
In 1999, thanks to his experience in Rockabilly Music, he became a member of the ‚Rockabilly Hall of Fame USA‘. In 1999 Marco made his first US tour and played with the international country and rockabilly artist Narvel Felts. In October 1999 he played his third British tour.

Quotes from original artists and magazines:

„I played with the greatest, Mark Knopfler, B.B.King, Eric Clapton.
I can say that Marco Di Maggio is one of them“ (Terry Williams).
&quotHigh speed pickin‘, a manic pickin‘ instro just to show the guitarist can play even better than he has done so far“ (Marc Fenech).
„…beyond the good rockin‘ beat we have an astoundingly guitar virtuoso
throught out this superb record with extremely strong harmonies“ (Ronnie Weiser, USA).
„They’re all great musicians and have fantastic voices. They are going to do
something really important“ (Billy Swan, Songwriter for Elvis Presley).
„Great album, great voices, superb recording quality…“ (Bob ‚Git it‘ Kelly, Songwriter for Gene Vincent).
„… some of the best guitar work I’ve heard for a long time“ (Steve Aynsley, Now dig this, U.K.).
„Great album, great musicians“ (Bob McCarver, Jerry Lee Lewis Management).