Sunburst – A tribute to Sun Records 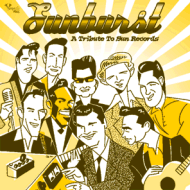 In 1950, the Memphis Recording Service was set up in a one story building on the corner of Union Avenue and Marshall in downtown Memphis, Tennessee. 706 Union was the address where black Rhythm ’n‘ Blues artists, so prevalent in that area, recorded their music. The most famous of these was B.B. King, a very popular figure in the juke joints and Blues houses of Beale Street. Sam Phillips owned the studio where he would record classic Blues records by Joe Hill Louis, B.B. King, Walter Horton and Roscoe Gordon for the Bihari Brothers‘ Modern label. In 1951, Sam recorded Howling Wolf and Jackie Brenson, leasing the cuts to Chess records of Chicago. Jackie Brenson is credited as writing the very first Rock’n’Roll song inspired by the latest model Oldsmobile car, a ‚Rocket 88‘! When it was released on Chess, the name on the label was Jackie Brenson and the Delta Cats who were really Ike Turner’s Kings Of Rhythm. Jackie Brenson was the saxophone player in the Kings Of Rhythm and the record became the hottest thing on the R’n’Bcharts.
Three years later, Elvis Presley recorded an upbeat version of Arthur Cruddup’s ‚That’s all right mama‘ at 706 Union and a legend was born. So, too,
was Rockabilly and SUN records became THE label in Memphis!
Sam Phillips went on to record the cream of Rockabilly with Carl Perkins, Charlie Feathers, Sonny Burgess, Warren Smith, Roy Orbison and Billy Lee Riley. He created legacies of recordings by Jerry Lee Lewis, Charlie Rich and the greatest Country singer of them all, Johnny Cash. He also produced, undoubtedly, the best secular gospel styled record ever, when he got Johnny Bragg to record his song ‚Just walkin‘ in the rain‘ with the Prisonaires. The song later hit the top of the Billboard charts by hit making crooner Johnny
Ray.Sun recordings were released in the 50’s and 60’s in Europe on the famous London-American label owned by Decca. In the Seventies Shelby Singleton, who bought the entire catalogue of Sun recordings from Sam Phillips, leased his product to Phonogram and subsequently Charly and Bear Family Records. Recordings that had not seen the light of day, when recorded, became Rockabilly classics and artists like Warren Smith, Sonny Burgess and Carl Mann began to tour the U.K. and Europe for the first time.
Vampirella Records has assembled a whole host of international artists in this tribute to Sam Phillips and his unique sound recorded at Sun.
From Germany we have the fantastic Paralyzers, Leroy Davis, Rick Hollow and the Pawnbrokers who all pay tribute to the most definitive of Rockabilly sounds. The Paralyzers pay homage to both Little Junior Parker and Elvis with their rockin‘ version of ‚Mystery train‘. Leroy Davis performs the cool Charlie Rich number ‚Rebound‘ before joining forces with Rick Hollow on drums to cut it with Roy Orbison’s ‚Domino‘. Rick, himself, rocks like crazy with Jerry Lee Lewis‘ ‚Whole lotta shakin‘ whilst the Pawnbrokers offer the Carl Perkins bopper ‚That don’t move me‘ and Sonny Burgess‘ energetic ‚Higher‘.
From Italy there are the exciting Di Maggio Brothers who give us Elvis‘ ‚I don’t care if the sun don’t shine‘ from their debut CD and Marco Di Maggio provides a superb rendition of the Gene Autry song ‚Lonely river‘ that Narvel Felts recorded at Sun in 1957.
From the United States of America, High Noon cut loose with the popular Elvis Sun classic ‚Just because‘.
Some of the best bands in the United Kingdom step forward to play their favourite music starting with the ever popular Rhythmaires who give us Billy Lee Riley’s ‚Got the water boiling baby‘ and Junior Parker’s ‚Feelin‘ good‘. The Rhythmaires have always been the bluesy end of Rockabilly. The Crawdads, on the other hand, sit right in the cotton pickin‘ middle with their version of Gene Simmon’s ‚Pop and Mama‘. The Teen Boppers ‚Romp & Stomp‘ just like Dusty and Dot with the Slim Rhodes band whilst Pete Hodgeson pays tribute to both Jerry Lee Lewis and Charlie Rich, the writer of ‚Break up‘. Ian Calford & The Brakemen have been making a lot of noise lately with their superb Vampirella release ‚Strapped for Cash‘ and from that CD we have selected their interpretation of Johnny’s first Sun release ‚Hey Porter‘. One of Sun’s more obscure artists who eventually visited our shores in the mid Eighties was the late Jimmy Wages who produced a mere handful of recordings that were never released at the time. They were, nevertheless, amongst the most exciting records that Sam Phillips ever produced. The Sugar Creek Trio choose Jimmy’s wonderful ‚Madman‘ to enhance our collection and Country Cattin‘ provide us with yet another Elvis Sun classic from 1955, ‚I’m left, you’re right, she’s gone“. Finally, Al Holden shows his versatility with Dickie Lee’s ‚Fool, fool, fool‘ and the Prisonaires‘ aforementioned classic ‚Just walking in the Rain‘.
Here then is Vampirella’s tribute to the Sun sound, a sound that is as exciting today as it was so many years ago and one that has been immortalised in the recent Peter Guralnick documentary, ‚Sam Phillips: The man who invented Rock’n’Roll‘! Steve Aynsley