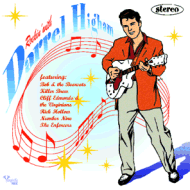 Darrel Higham is one of the top acts of the Rock’n’Roll scene and also a highly recommended session musician. As a result of numerous fan requests, we have compiled his hottest session work so far.

„It seems that everybody rocks when Darrel Higham is around. He has enhanced the performance of everyone he’s performed with, and that’s a pretty long list. For this collection, Vampirella have pulled together a number of tracks from their catalogue which feature Darrel on guitar, beginning with his first band, Bob & The Bearcats. From the group’s ‚Rollin‘ to the jukebox rock‘ CD we have Jesse James‘ ‚Red hot rockin‘ blues‘, Benny Joy’s title track and Darrel’s own instrumental ‚Walkin‘ the bearcat‘. This is a very strong opening trio of rockabilly ravers and the momentum is kept up by two offerings from ‚Killer Brew‘ (both unreleased outtakes) who impress with Glenn Honeycutt’s ‚Rock all night‘ and the Lamie Brothers‘ ‚Wore to a frazzel‘. Cliff Edmonds, vocalist with The Avengers, cut his two tracks with Darrel under the group name Cliff Edmonds & The Virginians. There’s lots of passion injected into Gene Vincent’s ‚Wedding bells‘, with Darrel in Cliff Gallup mode and ‚Sweet love on my mind‘ also features shades of Gene’s first legendary guitarist.
Darrel’s current band‘ The Enforcers, kick things into a higher gear with energetic versions of ‚I got the bug‘ and ‚Rockbilly boogie‘ together with a rockin‘ take on the theme from ‚The Sweeney‘ – all from their superb ‚Unleashed‘ album. Roy Orbison’s ‚(I got so) sentimental‘ is highly suited to Paul Ansell’s unique vocal style (he fronts Number Nine these days but I still maintain his finest hour was with The Blue Rhythm Boys and their Big Beat CD ‚At last‘). Rick Hollow gets right on track with the rockin‘ blues ‚Mean old train‘ before Darrel closes with the Steve Hooker penned ‚Leather heart‘ previously only available on 45.
Without wishing to sound too grand, this compilation is a mini testament to the talents of Darrel Higham, acknowledged internationally as one of today’s greates exponents of the rock n roll genre.“ Steve Ainsley – NDT