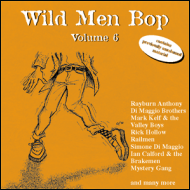 It seems like only yesterday that Vampirella began its ‚Wild Men Bop‘ series, a string of various artist compilations that truly live up the the ’sampler‘ concept, with selections from existing CDs mixed with previously unissued tracks. This idea has proved immensely successful, and here we are with Volume 6, which carries on with the formula. Hey! If it ain’t broke – don’t fix it!
Surely after listening the excellent tracks from Rick Hollow, Darrel Higham and Marco Di Maggio, you’ll be tempted to seek out their own CDs in the excellent Vampirella catalogue, or even search out new acts like Mystery Gang and Hi-Voltage from other sources. All of these acts combine to give you a ’snapshot‘ of the current Rock’n’Roll scene, and this CD has some of the best of the contemporary acts in this genre which, unlike other some other music genres, does not forget its roots and absorbs only what is relevant to the style. On this CD you’ll find acts that are playing this music today, keeping the tradition and spark of Rock’n’Roll burning bright almost 50 years after
it first exploded upon an unsuspecting world. This is NOT a CD from ‚would be popstars‘ trying to cash in on an existing
trend. This is the real stuff! Roy Williams