Country Cattin‘ – Talk of the town 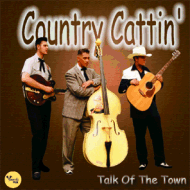 This album, ‚Talk of the town‘, was recorded at the Riverside studios in Blackpool. Chris Cummings from the studio is very much into our style of music, so it seemed natural to book a session. We arrived at the studio at 10.30 a.m. after a massive breakfast from Bob (Deafway Rock’n’Roll Club). We started recording and managed to record 23 songs by 5 p.m. We tried different echoes (Move It) to capture authentic sounds as well as recording everything live to capture the mood, energy etc. Chris did add some lapsteel to some of the tracks. This will be our second album, our first was released by Vampirella a couple of years ago, but since then Nathan (lead Guitarist) broke two of his fingers and it was touch and go as to whether he would ever be able to play or use them again, but with his determination and passion for playing he has managed to overcome it, and although his fingers are slightly out of shape he is playing better than ever as these recordings can prove. Things seem to have taken a while for ‚Country Cattin‘ to get going with things such as Nathan’s accident, being busy with other bands, keeping strict with the style of music so as not to fall in the trap of being a Cabaret band. We have been described as having a neo-authentic sound without drums and we write a lot of our own material that does stand up against some of the classics. The year 2002 already has us booked to play some major Rockin‘ and Country music festivals, supporting artists such as Lonnie Donegan, Alvis Wayne, Janis Martin, BR549, etc.